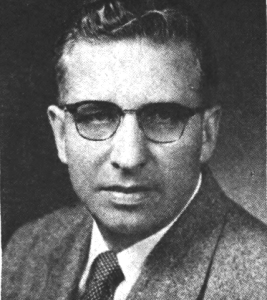 Knox was born January 13, 1899 on a farm, near Sault Ste. Marie. His parents, David A. and Elizabeth (LaLonde) owned and operated the property for many years in Soo Township. He attended the Pine Rest rural school in Soo Township and later took correspondence courses in business, while working in the Sault and Detroit. In 1919, he returned to the area to purchase and take over the operation of the family farm. He managed the property until 1943, when injury from a fall forced him to sell the farm. He remained in the area along Mackinac Trail, where he established his own farm equipment business. He previously had been the Manager of the Chippewa County Farm Bureau and engaged in the retail plumbing and heating business. This is where he remained during his retirement years in the 60s and 70s.

He was married to a local girl, Berth V. Byers on November 11, 1919. The couple had one son, William who became a publisher in Fort Atkinson, Wisconsin. Mrs. Knox passed away on September 9, 1971.

Victor Knox was always interested in politics and subsequently was elected as the treasurer of Soo Township in 1923 and 1924, and then to the Chippewa County Board of Supervisors, from 1925 to 1931. During his tenure, he was nominated as Chairman of the Board.

It was in 1936 that Knox was elected as our member of the Michigan House of Representatives, being the only Republican from the Upper Peninsula to be in this office at the time. He held that position until 1952, serving on the ranking ways and means committee, as the speaker pro tempore, and the majority floor leader. He sat on the State Reorganization Commission, Little Hoover Commission, the Council of State Governments, the State Victory Building Board, the State Planning Commission, the State Crime Commission, and the Soo Locks Centennial Commission. Lastly, when he was the official speaker of the Michigan House of Representatives, he left that position to run as a candidate for Congress.

In 1953, Victor Knox was elected as a Republican from Michigan’s 11th congressional district to the 83rd United States Congress and to the five succeeding Congresses, and served until 1965. He was the first Chippewa County resident holding this post since 1888, when Henry W. Seymour was our U.S. Congressman. Victor A. Knox was a designated delegate to the Michigan state constitutional convention from Chippewa District in 1961-62. He was an unsuccessful candidate for reelection in 1964, losing in the general election to Democrat Raymond F. Clevenger.

During the development plans for the Mackinac Bridge, Knox persuaded the legislature to help guarantee maintenance of the proposed span up to $500,000 per year. This helped assure the sale of $96 million in bonds to finance and construct the span. He was also instrumental in the planning of the Sault International Bridge. His influence was not limited to bridges, but also to the initial creation of the Lake Superior State College. Some local residents were pushing for the establishment of a community college. He was adamantly refusing to go along, citing lack of local resources to finance such a project. Knox along with Dr. Grover B. Dillman, President of MTU, went before the Governor and legislature, to guide legislation authorizing the founding of the original Sault Branch of the Michigan College of Mining and Technology.

He was an active member of a variety of organizations: Knights of Pythias, Elks, Freemasons, Lions, Grange, and Farm Bureau. 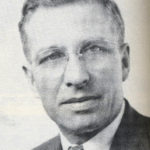 U.S. Congressman Victor A. Knox died at the Little Traverse Hospital in Petoskey and was interred at Oaklawn Chapel Gardens, fifteen miles south of Sault Ste. Marie. His obituary included a statement from Congressman John J. Rhodes of Arizona: “I am deeply saddened to learn of the death of Victor Knox. Victor and I came to congress together and served side by side for many years. I knew him as a highly capable legislator, a hard worker and a good person.”

The Victor Knox Drive is connected to the Myrtle Elliott Circle and loops around as a dead end, where Bridge Village is located. It has a total length of 734 feet. This information was obtained from the staff at the City of Sault Ste. Marie Engineering Department.