“Adams Street was named after Robert N. Adams, who came to Sault Ste. Marie in 1879 and purchased a 150 acre farm south of Easterday.

For many years, he conducted a dairy and delivered milk to city customers.

He later erected the largest building in Sault Ste. Marie at that time (the Adams Building).

R. Newton Adams platted his tract of land in 1887, naming one street after the family and two streets in this subdivision after his son, John Newton. Two other streets also take their names from his daughters, Mrs. W. F. (Ann Augusta) Ferguson and Amanda. From the sale of lots, on his former farm, Mr. Adams was able to retire in a comfortable style.”

“John Street was named by Robert Newton Adams in 1887. It is not known when it was actually built, but Mr. R.N. Adams had named other streets for part of his family. John Newton Adams was his son. It is located three blocks east of Ashmun and Newton.”

“Newton Avenue was named after John Newton Adams. When Mr. Robert N. Adams platted his additions to the city of Sault Ste. Marie in the year 1887, he named two streets in this subdivision: John Street and Newton Avenue, for his son John Newton Adams. It was platted and surveyed in 1887 by Guy H. Carlton, and today has a length of 5,180 feet (i.e. 1968) from Ashmun to 8th Street East.” 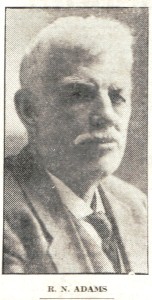 Robert Newton Adams was born on May 13, 1844 in Hasting County, Belleville, Ontario. His father was John Adams (July 1798 Chestershire England – 1872) and his mother was Ann Newton (1808 County Sligo, Ireland – 1852). The parents were both immigrants, settling in Hastings County, Ontario, where they were married. He became a prominent farmer and an influential citizen. They had nine children of which seven survived. Robert was the sixth child in order of birth.

The early experiences of Robert Adams were those secured in connection with the work on the home farm and with attending the common schools during the winter terms until the age of 17. At the age of 23, he courted Elizabeth Carr (1848 – 1921) and they were married on July 18, 1877. She was 18 years old. They had seven children, of which six survived to adulthood: George Herbert, Augusta Ann, John Newton II, Mary Gertrude, Bertha Lillian, and Clement Lawrenson. Amanda passed away in infancy.

He stayed in his native county for a period of six years, and later moved to Huron County, Ontario, where he continued to be identified with the basic industry of agriculture until 1879.

Robert Adams then moved back to Sault Ste. Marie and purchased from Thomas Ryan 150 acres of land that was at the time undeveloped, but afterwards was considered within the boundaries of Sault Ste. Marie. Adams cleared the land and platted it, selling lots which eventually became some of the most substantial residential and commercial sections of the city. Adams also engaged in grocery, merchandising, and banking businesses, and represented the area in the state legislature.

He was a stock holder of the First National Bank of Sault Ste. Marie, from the time of its organization on June 30, 1886

The Central Savings Bank of Sault Ste. Marie was incorporated in December 1902, with Robert N. Adams as its first president. Adams hired the architect Edward Demar to design a building. It was in late 1901 that Mr. Demar had commenced practice in Sault Ste. Marie, where he designed the Masonic Temple, the Newton Block, the Presbyterian Church, and the Loretto Academy. In 1903, The Adams Block was built and called “one of the most modern and architecturally attractive bank and office buildings in the Northern Peninsula.” A portion of the first floor of the building was reserved for the Central Savings Bank, while the rest of the building was used by other businesses. From the sixth floor of his fine seven-story stone and brick building, Mr. Adams gained an excellent view of his former farm, now constituting one of the most attractive sections of the city.

In 1904, Central Savings Bank merged with Chippewa County Savings Bank. Although Adams remained on the board of directors, he was no longer president of the institution. In 1926, the bank took over the assets of the Brimley State Bank.

In 1975, the C.S.B. moved its offices to their present location at 511 Bingham Avenue. Other businesses moved into the ground floor spaces, however, the upper floors remained empty for years. In 2010, after a few years of financial wrangling, the Adams Building and the next-door Masonic Block were purchased by a developer. Renovations were completed and now provide 4,500 square feet of ground-floor commercial space and 24 apartments. The project is known as “Park Place City Center.”

For a number of years, Mr. Adams was engaged in the grocery business as a member with the firm of Eccles & Adams. In addition, he was one of 10 men who effected the organization of the Lake Superior Company, which attained the right of way for the power canal. He was also one of the organizers of the W.F. Ferguson Merchandise Company, of which he was president for two years.

He served for a number of years as a member of the Board of Education, and within his incumbency of this position a number of the principal ward school buildings were erected. He was also a member of the Board of Public Works and in 1902 was chosen as a representative of Chippewa County in the State Legislature, for a term of two years. He was vice-president of the Sault Ste. Marie Hospital. He held membership in the Methodist Episcopal Church. The list of community involvements is too extensive to continue within this article, and would overflow with those of the Masonic fraternity. As for his travels in company with his wife, he toured the Mediterranean and Europe, as well as the southern states and Cuba.

Robert Newton Adams passed away on Saturday May 2, 1931 at 8:20 p.m. at his home at 313 Maple Street. The funeral services were held in his house on Tuesday May 5 at 2:30 p.m. with Rev. Marshall W. Hoyt of the Central Methodist Church officiating. He is buried in the family plot at Riverside Cemetery.

Adams Avenue is located south of East Easterday Avenue and east of Ashmun Street. This thoroughfare runs for a distance of 13 blocks and measures 3,780 feet in length. It starts at Ashmun Street and ends at Seymour Street.

Within the same neighborhood, one can find the naming of four streets and one avenue that are family related to Robert Newton Adams. They are named after his son John Newton, and two daughters, Ann Augusta, and Amanda.

John Newton graduated as a pharmacist, but did not practice his profession. He joined his father in the real estate and Insurance business. He was married to Angela Moloney and had two children, Paul Lincoln and John Newton III.

Augusta Street is 3,958 feet in length, running north to south from East Easterday Avenue and ending at Marquette Avenue.

Ann Street, both east and west, have a combined distance of 1,510 feet, starting from East Easterday Avenue to Brown Street (1,278 feet) and then from Pine Street to Helen Street (232 feet).

Amanda Street connects Bingham Avenue to East Easterday Avenue at an angle over a distance of 895 feet.

The preceding distances were made available by the City of Sault Ste. Marie Engineering Department.

Special recognition deserves to be highlighted for the assistance received from David Adams, great-grandson of R. N. Adams and former owner of the Adams Insurance Company on Arlington Street. Gratitude is expressed for the “Father’s Daily Morning Prayer” of March 1951 to John Jr., from Santiago De Cuba, Cuba. This document, along with family tree and family history (1891 and 1940), are now in the vertical files at the Judge Steere Room of the Bayliss Public Library, now part of Superior District Library.