“Bingham Avenue was named after Reverend Abelone Bingham, a Baptist minister who was with the Baptist Missionary Union, arriving in Sault Ste. Marie in 1828. He was a very active member of the Sault Ste. Marie community, conducting a school for Indian children.
One historical account list Reverend Bingham and his daughter, a school teacher, as passengers aboard the first vessel to go through the Soo Locks.
Bingham Avenue is 17 blocks long, 2,610 feet and it runs from Eighth Avenue to Park Place (aka Water Street). Bingham Avenue is one of the streets which have a bridge connecting the island part of Sault Ste. Marie with the remainder of the city. Bingham Avenue’s fist recorded plat date is 1887, but it was surveyed in 1893. It was made because people wanted to get to Park Place (aka Water Street), the main street and back again.
Bingham Avenue was known as Church Street for many years. On the old pathway or near the street the first Roman Catholic and Protestant churches were erected, thus receiving its first name.” 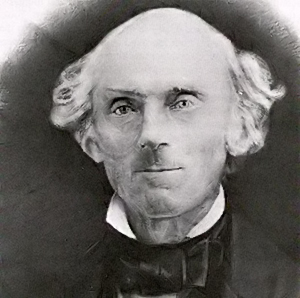 Abel Bingham was born in Enfield, Grafton County, New Hampshire, on May 9th, 1786. He was the youngest son of Elisha and Hannah Slapp Bingham. The family consisted of nine children, five boys and four girls. His mother died when he was six years old, and in 1798, his father moved the family to Jay, New York. The same year, Elder Solomon Brown, a Baptist minister moved to Jay, formed a congregation and began worship services. Although Abel was seriously impressed on the subject of religion at the age of nine, it was not until he was twenty-two that he was constrained, under the ministry of Pastor Brown, to seek a Savior, instead of seeking salvation from punishment. He was baptized and joined the church in 1808. In 1809, Abel Bingham married the pastor’s daughter, Hannah Olmstead Brown.
The War of 1812 disrupted Bingham’s plans to join his father-in-law in Caledonia, New York. Abel was a sergeant in his militia company when he was called into service in 1813. He fought valiantly and was commissioned as a lieutenant. During one fierce British attack across the Saranac River in upstate New York, Bingham was wounded in the forehead and thought to be dead. His head wound had fractured his skull, rendering him unconscious, but he regained consciousness in a nearby house, and with a bandaged head, he returned to the battle. Bingham valued his military service, saying that it gave him an excellent school of discipline.

The war over, the Bingham family moved to Caledonia and purchased a farm. But Abel’s thoughts were more and more occupied with the ministry, especially missionary work. He had a special burden for the Seneca Indians on the Tonawanda Reservation near Buffalo, New York. As he prayed over this burden, friends told him of an opening on that reservation.

Bingham served on the Tonawanda Reservation near Buffalo, New York, for six years, during which he and Hannah buried two children. In spite of vehement, and at times violent, opposition from traditional Chief Red Jacket, Bingham and his wife persevered to establish a school and church with the assistance of Chief Little Beard and his Christian party. Sensing that his ministry at Tonawanda was concluded, Abel looked to the mission board for a new assignment.

In July 1828, Abel Bingham was appointed as missionary to the Ojibway Indians of Lake Superior at Sault Ste. Marie. Bingham’s missionary outreach in Michigan’s rugged Upper Peninsula was even more energetic that it had been in New York. He organized a mission school to provide education to native children from the area. In the spring of 1829, he returned to New York to get his family and bring them to the Sault. He also brought some carpenters from Detroit, and constructed a mission building to be used as a schoolhouse, boarding facility for students, and residence for himself and his family. By December 1829, the school was boarding twelve children and in a few years about eighteen children lived there in an average year.

The mission was located on the present site of the Chippewa County Courthouse. The mission had between seven and eight acres of grain, one acre of potatoes, and other garden vegetables. Animals were also kept, consisting of eight head of horned cattle, three oxen, two cows and a heifer, two smaller cattle, and four swine. His inventory included one boat, oars and sails, valued at $18 and one tent, one oilcloth and one pair of snowshoes valued together at $9 for traveling purposes.

Abel Bingham’s burden for the spiritual well-being of the Indians of the Upper Peninsula moved him to make regular journeys to spread the Gospel. He reached out to native bands on Sugar Island, Garden River, Tahquamenon Falls, Whitefish Point, even extending his tours as far as Goulais Bay, Grand Island and Marquette. In summer he traveled in his boat or canoe and in winter on snowshoes, with his dog-train, carrying provisions and bedding; visiting each different band at least four times a year.

When the State Lock opened in June 1855, Reverend Bingham and his family as well as several other Sault residents were invited to be guests of Col. Sheldon McKnight, owner of the Steamer Illinois, which was the first vessel to pass through the canal.

Bingham ended his mission work after the summer of 1855 and moved to Grand Rapids. The Baptist Mission Society sold most of the block enclosed by Bingham, Spruce, Court and Maple Streets to Chippewa County in 1877, and the courthouse was built on the land.

Reverend Abel Bingham passed away in 1864 and is buried in Fulton Street Cemetery, in Grand Rapids, Kent County. Abel Bingham left a lasting spiritual legacy when he and his wife Hannah retired.

The northerly portion of Bingham Avenue used to be called Church Street because of the location of the first church built by Father Jacques Marquette, in 1668. Historically, this was considered to be the first permanent establishment in the State of Michigan, thus associating it with the founding of Sault Ste. Marie.

Bingham Avenue runs on the north to south axis from Water Street to Marquette Avenue and covers a distance of 6,268.28 feet. This information was acquired from the City of Sault Ste. Marie Engineering Department.