“Easterday Avenue was named after a Reverend Thomas R. Easterday. Rev. Easterday, born on October 27, 1837, served as pastor of the Presbyterian Church, preaching his first sermon on Christmas day of 1864. Rev. Easterday served as Commissioner of Schools for Chippewa County for many years, and conducted the village school, (at present site of Ridge and Maple). Perhaps his greatest fame as a colorful figure was his nickname of the “Marrying Parson”, for it is believed that he married more couples than any other preacher in the Sault’s history, averaging at one time – 3 couples per day.

Source: “On the Streets Where We Live”  A history of the streets and avenues of Sault Ste. Marie – A Tercentenary and Michigan Week project of the seventh grade students of Sault Junior High School – 1968.

Thomas Robertson Easterday was born on October 27, 1837 in Jefferson County, Ohio. He was the son of Daniel Easterday (1813 – 1901) and Jane Robertson (1816 – 1895). There were nine children in the family, consisting of five brothers Levi Fast, Amos William, Martin Luther, Oscar Melanchton, David Franklin and three sisters Anna Marie, Hannah M., and Laura Jane. The family moved from Ohio to Lincoln, Nebraska, with the exception of Thomas who in 1851 went to Springfield, Illinois to attend school. While in public school, one of his class mates was Robert T. Lincoln, son of Abraham Lincoln (President of the United States from 1861 – 1865) and very well acquainted with Daniel Easterday. Thomas attended college for a period of seven years, graduating at the Lutheran Seminary at Springfield, Illinois, in 1864, with the degree of Bachelor of Arts.

After his graduation, Reverend Thomas R. Easterday came to Sault Ste. Marie and was hired as a stated supply minister. He preached his first sermon on Christmas day 1864. The following year, he was accepted by the Lake Superior Presbytery as a Michigan fledged Presbyterian minister. He inherited a congregation of eleven members, being Phyletus S. Church, Elizabeth Church, L.L. and Phoebe Nichols, Joseph and Jane Mason, Charles T. Harvey, Julia Hopkins, Olive W. McKnight, Adaline Jones, and Maria Spaulding. The church grew rapidly as Easterday was considered quite liberal as he would baptize, marry or bury just about anyone. Under his leadership, the church grew quickly to around 200 people. By the time he died, he claimed to have performed at least 3,500 marriages.

He himself at the age of 25 was married to Leona Jane Tyson (1844 – 1919), on December 24, 1862 in Springfield, Sangamon County, Illinois. She was the daughter of J.R. Tyson, a native of Lincolnshire, England. They had three children in number: Lillie who died of young age, Rose E. and Ora Thomas. In 1920, at the age of 82 and widowed, he married Effie. While residing at 166 Kimball Street (later renumbered 706) in Sault Ste. Marie, he was still living with his children and step-children, Ora Thomas age 37, Frank age 11, Fred age 10 and William age 5, in addition to his daughter Rose E. age 39.

Besides his pastoral ministry, Rev. Easterday was very involved in education and was elected as the Chippewa County school administrator in 1895. He held that position for the next fifteen years. He was also involved in banking, being the local agent for the Peoples Savings Bank of Detroit, and was somewhat involved in local real estate. There is a plat in the City named after Rev. Easterday. He was a member of the City of Sault Ste. Marie Commission in 1889 and 1890, when Otto Fowle was Mayor. From time to time, he also served as a stated supply and guest speaker at various churches in the county

His active ministry ended abruptly in February 1882 when at the age of 45 he had suffered a stroke. After his recovery when he was in convalescence in Missouri, he returned to Sault Ste. Marie and remained until his death on December 18, 1927 at the age of 90. He is buried in Pine Grove Cemetery with both of his wives, as well as two of his children.

“Sings and Preaches — I remember when Reverend T.R. Easterday sang in the choir and preached in the Old Presbyterian church. Good singers were scarce in those days in the Soo. And Mr. Easterday had to sing and preach. But as a preacher I admired him most. His hair was now white as snow, as then black as coal, and long and curly. He was a striking figure in the pulpit, standing erect, his black and curly hair swaying with every motion of his body, his countenance firm, as with piercing eyes, and energetic gesture he laid down God’s law.” – E. J. Wiley. 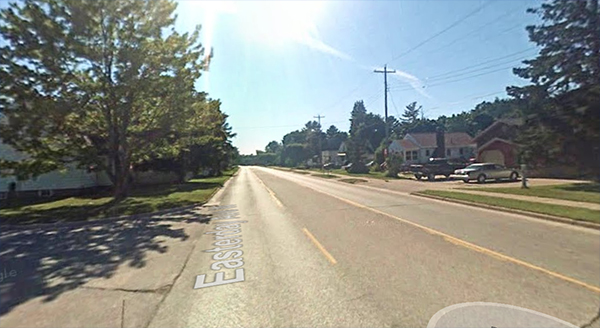 Easterday Avenue starts at the intersection of Ord and Spruce Street, and proceeds in a westerly direction to end at West 4th Avenue, for a distance of 14,308.7 feet. This information was obtained from the City of Sault Ste. Marie Engineering Department. The most prominent portions of the Avenue are the intersection at Ashmun Street and the hill.

by John W. Kenn with contribution by Nancy Gillotte