Barbeau Street surveyed in 1876 runs a length of 670 feet from Spruce to Portage. His fame in the Sault area resulted in the Bruce Township Post Office of Barbeau, and through a mispronunciation the city of the world circus museum, Baraboo, Wisconsin received its name through Peter Barbeau” 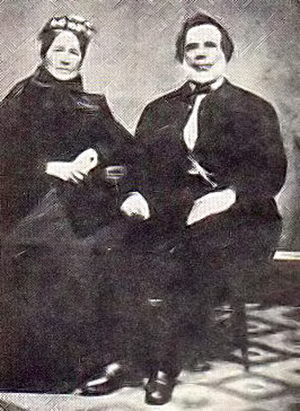 Pierre De Boisdoré Barbeau was a prominent merchant and community leader in Sault Ste. Marie, during the nineteenth century. He was born June 29, 1800, in La Prairie, Québec. According to available information, Barbeau arrived in the Sault in 1817. He was initially employed by the Hudson’s Bay Company, but eventually entered the service of John Jacob Astor’s American Fur Company. After tenure of company service in Baraboo, Wisconsin, he turned to Sault Ste. Marie in 1834. In the same year he was naturalized as a U.S. citizen at Mackinac, and indentured as a clerk under Gabriel Franchère, the factor of the American Fur Company in Sault Ste. Marie.

Mr. Barbeau continued in the employ of the company until 1842, when, after being refused an increase in salary, he resigned his position to embark upon his own commercial endeavors. He eventually opened a general store and trading post and organized an extensive fishery on Lake Superior.

In 1831, Pierre Barbeau married Archange LaLonde (1810-1895) daughter of Josette Marlow Lalonde who settled in the Sault in 1826. Two of three daughters survived to marry prominent area merchants. Henrietta married Myron W. Scranton, who purchased Barbeau’s store in 1864. Flavia married James Pendill of Marquette, who had established a major sawmill west of the Sault as early as 1834. Augusta died in early childhood.

In addition to Barbeau’s commercial interests, he maintained an active career in civic affairs. He became a county commissioner in 1838. He was elected to the state legislature in 1842 and Register of Deeds in 1845. The following year he secured a county judgeship. In 1849 and again in 1879 he was elected village president of Sault Ste. Marie. Barbeau was an early and effective advocate of the first shipping lock (State Lock) at Sault Ste. Marie, and when the second lock (Weitzel Lock) was opened in 1872, he presided over the dedication ceremonies.

During his years of residency in the Upper Peninsula, Barbeau acquired extensive holdings of property in the area. A log house at the corner of Barbeau Lane and Water Street served as the first Barbeau home and remained in the family until 1895. He purchased and resided in the former Indian Agency house, previously the residence of Henry Rowe Schoolcraft. He owned and took possession of Chippewa Street, which was later changed to Barbeau. The settlement of Barbeau, its post office and Barbeau Point were named after him. Bass Lodge, built on Neebish Island ca 1850, remained in the family until 1873. He also operated trading posts at Grand Marais and La Pointe on Lake Superior.

Pierre De Boisdoré Barbeau died on October 17, 1882. He is buried along with his wife (Archange), one daughter (Henrietta), a son-in-law (Myron V. Scranton), and a granddaughter (Henriette Irène) at the Riverside Cemetery. Their plots are located on the far South Eastern corner of the grounds, next to Frechette Creek. Barbeau Street is 1,838.78 feet long, starting from East Portage Avenue across the power plant, intersecting at East Spruce Street, and ending at East Easterday Avenue.

Sault Ste Marie [MI] Evening News 21 Oct 1882
Death of Honorable Peter B. Barbeau Died, on Tuesday morning the 17th inst, at the agency, in this village, of heart disease, Hon. Peter B. Barbeau, aged 82.
Mr. Barbeau went to Detroit recently to attend to some business to which he gave his undivided attention for the whole of Monday, the 8th inst. The following day he was taken ill and was unable to return home for some days. Having sufficiently recovered to travel he came up on the steamer China, Monday morning of this week. His physician and family attended him that day, all considering his condition alarming. He complained of no uneasiness except that of fatigue, and himself, as also his friends, anticipated a speedy recovery, enjoying once more the quiet and rest of his home. He bade his daughter give herself no trouble on his account but to return home, for in case he needed any special attention he could easily send for her. Shortly after two o’clock as he slept, a change was noticed in his breathing by one of his attendants, who called the attention of the other, who recognized the symptoms as very unfavorable. At once Mrs. Scranton was sent for but the messenger had scarcely left the house before death set his seal, and the unfettered spirit fled.
In the early day the Barbeau family emigrated from France and settled near Montréal at La Prairie, Lower Canada, where the subject of this sketch was born in the year 1800. A large family they were in this early day, and many of the descendants reside still in the city of Montréal.
Mrs. Rielle, a sister of Judge Barbeau, two years older, is the only survivor of his generation. She yet resides at La Prairie.
Mr. Barbeau engaged in the service of the Hudson Bay company when 17 years of age. He afterwards was employed by the American Fur Company, and while thus engaged came to Sault Ste. Marie, sixty years or more ago. Here he was married to Archange LaLonde in August 1830.
The offspring were three daughters, the eldest of whom, the wife of James P. Pendill, of Marquette, was born at Sault Ste. Marie. It seems a somewhat singular coincidence that this first child was born on the same premises of which he thought so much, and only a few years ago purchased and refitted for the home of his declining years, which property he now leaves to his heirs as the home. The second daughter is well known to the habitants of this village as the wife of one of our leading citizens, Myron W. Scranton, Esq.
While in the employ of the American Fur company, Mr. Barbeau was stationed for a time at Lac de Flambeau, Wis. He was the first white man that ever lived Baraboo, which name he gave to that flourishing young city, the nearest approach the Indians could make to pronounce his name being Mr. Baraboo. The wife of our honored postmaster was the first white child born there. Judge Barbeau, being called to this place from Torch Lake, the third daughter was also born here. The child lived only three years.
Judge Barbeau was honored time and again by the people with different public offices. There is scarcely an office of trust in the gifts of the people in this part of the peninsula which he did not fill with credit to himself and honor to his constituents. He was chosen in years gone by to represent the district in the State Legislature, and not long since, when our village was first legally organized as such, Judge Barbeau was elected without any opposition to be its first president.
He was a man of most decided character and none ever more thoroughly despised a hypocrite than he. He had an opinion and knew, and was ever ready to give, an intelligent reason for that opinion. In society one would have supposed he had always associated with Stanhope himself.
He visited the home and scenes of his childhood, accompanied by Miss Scranton his granddaughter, only one year ago. To his sister and relatives the recollection of this visit will now be especially precious since his sudden demise.
Whatever the agency must have hitherto witnessed, on Wednesday at 2 pm, it saw a very large concourse, among who were an unusual number of aged folk, when the last sad funeral rites were performed.
We buried him in a lovely spot chosen by himself, in the midst of an evergreen grove, not far from his late residence.
“How calm his exit; Night dews fall not more gently to the ground, Nor weary worn-out winds expire so soft.”