“Trempe’s Grand Avenue was named after Louis P. Trempe (February 25, 1829 – January 5, 1892). Arriving in the Soo in 1849, he inherited his father’s store and purchased a new store on River Street. He was a smart and leading business man, loved by the Natives and respected by the white people. He was elected to many local positions.
This street was first surveyed on September 4, 1855 by a United States surveyor, Thomas Whipley.
Trempe’s Grand Avenue is three blocks in length and runs south connecting Emeline with Spruce Street.” 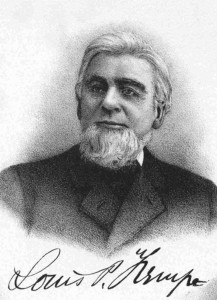 Louis P. Trempe was born February 25, 1829, in St. Ambroise. This hamlet is located 147 miles north of Québec City, in the Lac St. Jean area. He had four brothers and four sisters. When he turned 20, he along with his father arrived in Sault Ste. Marie. His father opened a store on the present site of the Island Books and Crafts, on the corner of Portage Avenue and Ashmun Street.

After a short time dealing in general merchandise, ship stores, wood and coal, his father passed away. Louis succeeded in the ownership and management of the enterprise and became very prosperous. In 1852, his maritime commerce was in connection with tugging, lightering and wrecking of all description. He was also interested in mining lands, some of which were being developed and returning rich paying ore. He had an interest in silver and lead mines and other mining properties. He was largely investing in town property; he owned four tugs and one passenger boat and other boat property; owned large dock property and large warehouse. Mr. Trempe started without any pecuniary assistance, and amassed a handsome fortune.

He was a resident for 44 years and involved in all aspects of the community. Sault Ste. Marie Township was organized April 12, 1827. At that time, it embraced all the territory within a line from the Neebish Rapids west to the intersection of a line drawn due south from Point Iroquois of Lake Superior; thence north with such line to the intersection of the United States boundary line; thence down the St. Marys River to the Neebish Rapids. Louis P. Trempe was active as one of the township officers in the capacity of Supervisor.

The first meeting of the Village of Sault Ste. Marie was held February 2, 1874, with Peter B. Barbeau as president and Louis P. Trempe as one of the many trustees. He became president for three years, and later remained as a village trustee until the end of his second term in 1882.

Mr. Trempe was later appointed as county treasurer, postmaster at the Soo office holding that position from July 3, 1886 to December 1, 1889, and also a member of the first Water Power Canal Company. He was register of deeds at the time of his death, on January 5, 1892 at the age of 62 years. 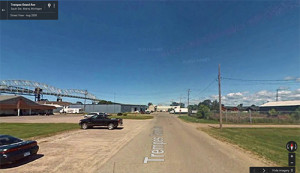