“Nicolet Road takes its name from Jean Nicolet, an early French explorer who served under the Governor of New France, Samuel De Champlain in the early 1600. He is credited with being the discoverer of Lake Huron, Michigan, and Lake Superior in 1635. Because of this great explorer, the city fathers found it appropriate to name a street after this Frenchman.” 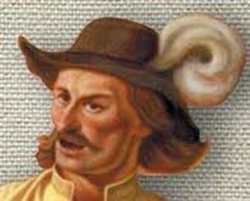 Jean Nicolet de Belleborne was born in Cherbourg-Octeville, France, in 1598, the son of Thomas Nicolet, who was “messenger ordinary of the King between Paris and Cherbourg”, and Marguerite de la Mer. He was a known friend of Governor Samuel De Champlain and Étienne Brulé. He was attracted to Canada to participate in Samuel Champlain’s plan to train young French men as explorers and traders by having them live among Natives. The French were setting up fur trading under the Compagnie des Marchands.

In 1618, Jean Nicolet immigrated to Québec as a clerk to train as an interpreter for the Compagnie des Marchands, a trading monopoly owned by members of the French aristocracy. As an employee, Jean Nicolet was a faithful supporter of the Ancien Régime.

To learn the language of the First Nations, Jean Nicolet was sent to live with the Algonquins on Allumette Island, a friendly settlement located along the important Ottawa River fur trade route. Upon his return to Québec in 1620, he was assigned to live among the Algonquin people in the Lake Nipissing region. During his nine-year stay, he ran a store and traded with the native peoples in the area.

By turn interpreter, explorer, public servant and colonist, Nicolet is one of the most prestigious figures in the history of North American exploration. Since the late 19th Century, he has been credited as being one of the first Europeans to have sailed around Manitoulin Island to enter Lake Michigan. However, based on a thorough analysis of the Jesuit Relations for 1640 and 1642-1643, this is the only source that allows us to follow Nicolet’s progress to the American Northwest.

Various events in the interpreter’s professional and personal life allows us to establish his travels around this time, the moment when he was “delegated to voyage to the nation known as the Sea People, and treaty of peace with them and the Huron”.

Accompanied by seven guides, Nicolet departed from Huronia, moving southeast on the French River, which empties into Lake Huron. Jean Nicolet paddled on past Sault-Sainte-Marie – where Étienne Brûlé had stopped – and discovered Lake Superior.

In July 1634, Jean Nicolet left for Trois-Rivières at the head of an expedition of 150 canoes making for Huronia. In that country, he left three missionaries, including Father Jean de Brébeuf. A few weeks later, he was back at this departure point, where Governor Samuel de Champlain supposedly met him on August 3, 1634.

Jean Nicolet settled down in Trois-Rivières. In 1637, he was granted a plot of land near this post, as well as land from a fief co-owned with Olivier Le Tardif. He had married Marguerite Couillard, who gave him two children. His daughter, whose first name was Marguerite, became the wife of Jean-Baptiste Legardeur de Répentigny, a member of the Conseil Souverain. He is the same man who built the fort on the waterfront of Sault Ste. Marie in 1751 known as Fort Répentigny.

The discoverer of Lake Superior and the man who had “penetrated furthest into these most remote of lands”, did not know how to swim. He died in the waters off Québec in October 1642: “On October 28, the funeral was held for Monsieur Jean Nicolet and three of Monsieur de Chavigny’s men, drowned in a shallop, as they were going from Québec to Sillery; their bodies were never found.”

Nicolet Road is located outside of the boundaries of the City of Sault Ste. Marie. It starts at the intersection of Riverside Drive, proceeding in an easterly direction, between East 4 Mile Road and East 9 Mile Road.