“Seymour Street is named after Henry William Seymour who owned and operated a prosperous lumber mill at the street’s current location during the 1880s. Henry Seymour was born on July 21, 1834, and raised in the state of New York. In 1856 he was admitted to the bar after graduating from the Albany (New York) Law School. In 1873, Seymour moved to Sault Ste. Marie.

Today, (i.e. 1968) Seymour Street runs a distance of over two miles from Larke Road to Spruce.”

Source: “On the Streets Where We Live”  A history of the streets and avenues of Sault Ste. Marie – A Tercentenary and Michigan Week project of the seventh grade students of Sault Junior High School – 1968. 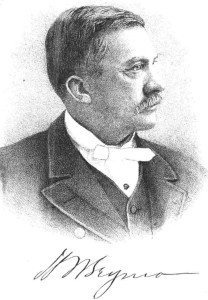 Mr. Seymour attended the public schools, Brockport Collegiate Institute, and Canandaigua Academy. He graduated from Williams College of Williamstown, Massachusetts, in 1855. He studied law in Albany, New York, taking lectures at the Albany Law School, and was admitted to the bar in May 1856, but never practiced.

Seymour engaged in mercantile pursuits in Brockport until 1872 when he moved to Sault Ste. Marie, Michigan, where he engaged in the agricultural manufacturing of reapers and subsequently in the manufacture of lumber. He was a pioneer in the lumbering business in the upper lakes region and succeeded in acquiring a comfortable fortune. He was the first to use log booms in order to handle the timber on the lakes. This plan of hauling lumber had by then revolutionized the business. In the winter of 1873 – 1874, he got out a large cut of logs on the Shelldrake River and built a mill on the waterfront of the St. Mary’s River during the following spring. This was the site which was then covered by a part of the power house of the Michigan Lake Superior Power Company.

Mr. Henry William Seymour served in the State House of Representatives, Cheboygan District, in 1881 and 1882, and in the State Senate, 31st District from 1883 until 1887. In 1887 and 1888, he represented the 30th District in the Lower House in Congress. In a special election on February 14, 1888, Seymour was elected to fill the vacancy caused by the death of Seth C. Moffatt, who was the 29th Speaker of the Michigan House of Representatives. As a Republican from Michigan’s 11th congressional district to the 50th Congress, he served from February 14, 1888, to March 3, 1889. He was a man of sterling integrity and was honored by all who knew him. He was instrumental in no small way in promoting the best interests of his adopted city, and from the time of his arrival until his death was interested and active in every movement calculated to promote her prosperity.

In 1885, the original St. Mary’s Falls Water Company was organized. He identified himself with the project and was elected President of the company. He was one of the 10 stockholders who transferred the property to an organization of western people known as the La Crosse syndicate. Later in 1892, Henry Seymour along with William Chandler co-founded the Edison Sault Electric Company, Inc.

For many years, Mr. Seymour was a member of the school board, and was instrumental in bringing about the present efficient system under which the public schools are conducted. It was through his efforts that the site of the High School building was secured from the government land originally belonging to the old fort Brady tract. The school was built in 1884 on the corner of Portage Avenue and Church Street (aka Bingham Avenue).

While in the state House of Representatives, he took a leading part in the transfer of the State Lock and the ship canal to the United States government in 1881 – 1882. While in Congress, he secured the passage of the bill removing Fort Brady from the river front on Water Street to its present site on the hill, where Lake Superior State University now stands.

When elected to the House of Representative, this district was largely Democratic. Mr. Seymour’s popularity and strength was shown by the fact that he carried his own county by almost unanimous vote. He was also a member of the old village board, serving as president for a time.

When the First National Bank was organized, Mr. Seymour was one of the prime movers in the enterprise and was for many years, vice president of the institution. It was largely through his instrumentality that the gift from Andrew Carnegie for the public library was secured and the transfer of the site for the building from the government was largely due to his untiring efforts. He was one of the building commissioners and up to the time of his death was president of the library board.

Henry W. Seymour died from heart failure on April 7, 1906 at the age of seventy-one, while on a visit in Washington, D.C.; he is interred at the Lakeview Cemetery of Brockport, NY.

He was a man who believed in the Soo and fought for it at every turn. He had been the city’s right hand man in furthering its interests and many of the improvements were brought about through his never-ending endeavors on behalf of the people.

Seymour Street extends for a distance of 11,313.2 feet within the city limits, from East Spruce Street to 3 Mile Road, and then further south for an additional 2 miles to end at 5 Mile Road. This information was obtained from the City of Sault Ste. Marie Engineering Department.

SOURCE: Biographical Directory of the United States Congress – 1774 to Present