“Sherman Park Drive, like the park itself, is named after a former city manager of Sault Ste. Marie, Henry A. Sherman who served from 1920 to 1948.

Located in the Lake shore subdivision, the street was constructed in 1949.”

Mr. Henry A. Sherman was born near Owosso, Shiawassee County, Michigan on April 12, 1883. He was the son of Albert A. and Julia Amelia (Starring) Sherman. He was the fifth of a family of six children, three girls and three boys. He graduated from the Owosso public schools and went to the University of Michigan, graduating from that institution’s school of engineering in 1906. While in college, he was a member of the Sigma Chi fraternity.

He spent periods of time following his graduation from college as engineer in Allegheny County, PA, where he soon became a draftsman in the office of the company engaged in concrete construction work.   In November 1906, he entered the employ of the Detroit River Tunnel company, with which he served as chief inspector until the spring of 1908. He was then employed with the United States government as inspector and junior engineer in connection with channel improvement, with headquarters at Sault Ste. Marie, where he was resident engineer in charge of three government contracts.

Mr. Sherman was married to the former Kristine Flaa in Ishpeming on June 30, 1917. She was employed as a teacher in the city school system. They had three sons, Henry Starring, James Leonard and Peter Robert, aged respectively (1927) nine, seven and five years.

Well known throughout the United States, Mr. Sherman was one of the pioneers in the city manager movement in this country. During the height of his career, he won national acclaim in his efforts at cutting the city’s debt service. He had been largely responsible for cutting the city’s debt of $240,000 in 15 years. He was hailed at the time (1934) as a “million dollar no man”. Pulling the city out of debt was accomplished through the issuance of serial bonds, which had to be paid off at regular intervals.

He also was accredited with revamping an old, expensive city water distribution system. It was put on its feet and organized into a unit which paid for itself.

Other accomplishments of Mr. Sherman included the acquisition of Kinross airport as a major airline terminal. He was instrumental in acquiring the land and creating the city municipal airport. He performed the groundwork which resulted in construction of the Pullar community Building. In 1923, Mr. Sherman was instrumental in making the Sault the first town in the state and the second in the nation to establish a system of placing iodine in the city water supply as a goitre deterrent.

Among other accomplishments was the acquisition of park property in the area of the city pumping station. The park was named in his honor. The grounds were later dedicated during the 1931 Labor Day celebrations, hosted by the Trades and Labors Council and Sault Workingmen’s Club. The event was attended by over 400 people. In 1933, City commissioners under the advice of the city manager decided to build a pavilion on the site. Plans for a building made of logs cost less than $2,500 once completed. In the summer of 1934, the Sherman Park Pavilion was officially dedicated by the then Mayor George J. Laundy.

As City Manager, Mr. Sherman was also responsible in designing and working for the Ashmun street sewer and the Algonquin Street pavement and sewer. He was known as a pioneer in a municipal snow removal program.

Active in community affairs, Mr. Sherman was the commander of Sault Ste. Marie CD during World War II. He was past president of Rotary Club. He was highly active in church affairs serving on the St. James Episcopal Church vestry for about 25 years. He was a member of Le Sault Club, he served as a secretary of the Country Club, and he was a member of the Masonic Order and also with the Benevolent and Protective Order of Elks (BPOE).

At the time of his retirement on June 1, 1948, he was the third oldest city manager in line of service in the nation. It was soon afterward that he became ill, suffering from heart ailment. He passed away on February 18, 1951 in his home at 320 East Spruce Street, at the age of 67. His body was laid in state at the Vanderhook Funeral Home, where an Elks Memorial service was held. Funeral rites were performed at St. James Episcopal Church, with Rev. Dudley B. McNeil officiating. Mr. Henry A. Sherman is buried at the Riverside Cemetery, next to his wife Kristine. 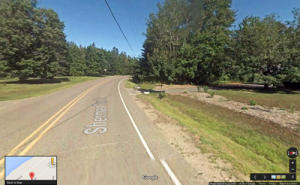 Sherman Park Drive is 6,272.9 feet in length, stretching from the 24th Street West intersection, through the Lakeshore Subdivision, and ending at the Bermuda Avenue. The following information was garnered from the City of Sault Ste. Marie Engineering Department.

Please note that this coming summer, Sherman Park will be the site of a special dedication ceremony. There will be more to come later, as plans are being finalized.