“Glenn Avenue was named after Glenn Kemp on January 30, 1902 by George and Viola Kemp, his parents. Later, his brother was to operate Kemp’s Coal Dock in the city during prosperous years. It was surveyed in 1902 by George W. Brown.

Its location is north of Portage Avenue, south of Water Street, west of the Pullar Building and one block east of Brady Street, running at total length of 380 feet.”

Glenn (Dayton) Kemp was born in March 1884 in Sault Ste. Marie. His namesake along with that of his ancestors remains ever present within our community, with the George Kemp Downtown Marina. His presence within our community was short in nature, since he moved and lived most of his adult life in California. He passed away in November 1914, at the age of 30.

Glenn’s grandfather, Joseph B. Kemp, was born at Shelburne, Massachusetts on August 30, 1813; he was educated sparingly in the school of his native state. Joseph B. served with distinction as captain of his company in a Michigan regiment in the Civil war. Joseph Kemp was a son of Captain Lawrence Kemp Sr., who was a patriot soldier of the Continental Line in the War of the Revolution, gained the rank of captain, and was one of the minute men in service at the historic battle of Lexington. At the age of fifteen, Joseph moved to Ohio and lived with his sister and her husband. He became interested in the farming industry. His wife, whose maiden name was Harriet Bell, was a daughter of Captain Elias Bell, farmer and patriot soldier in the War of 1812. Their marriage was solemnized June 10, 1840. The family name is of German origin and was originally spelled Kempf, but the final letter was dropped after a time and the present spelling has since been used.

In 1845, Joseph Kemp came to Sault Ste. Marie on the brig the Ramsey Crook, which was operated by the American Fur Company. This was the ship’s returning trip from the South, with supplies for the Northern Trading Posts. Pleased with the country, he decided to locate at the Falls of St. Mary’s river. He was joined by his family, who left their old home in Huron County in the spring of 1846. On April 16th, they stepped from the propeller Chicago to the wharf at Sault Ste. Marie. Mrs. Kemp shared with her husband in the experiences of the pioneer days on the Upper Peninsula, where both continued to reside until their death.  They had five children: Christine, Lewis, Johanna, Joseph B. and George. Here he became active in the fishing and fur trade.

Later, President Fillmore signed the deed to Lime Island under the Homestead Act over to Joseph Kemp who was the first recorded “owner-settler” of Lime Island. He moved and became interested in property on the eastern side of the Upper Peninsula which included Lime and Drummond islands. He and his family owned the island for 37 years.

While on the Island, Joseph Kemp pursued reclamation and development of Lime Island. He grew hay, wheat and potatoes. He made friends with the local Native Americans and traded with them.

It was in 1853 that the Kemp family returned to Sault Ste. Marie. He was employed to locate land granted by the State of Michigan to the company that was to construct the original shipping canal at this point. From 1862 until 1865, he was employed as a keeper of the lighthouse at Whitefish Point and thereafter he was Deputy Customs Inspector at Pigeon River and the Sault utilities.

Mr. and Mrs. Kemp and their children moved back to Lime Island. It is to be recalled that he laughingly designated himself as the “governor of Lime Island.” They processed the quarried limestone on Lime Island by use of the kilns. A cooper’s house (a cooper is a man who makes barrels) was located north of the kilns. The barrels were constructed there. They filled the barrels with powdered lime and sold them off of the dock, which was located nearby.

In 1885, Joseph Kemp sold the island to Lime Island Manufacturing for $5,200; thus ended a career in local enterprises and the enjoyment of retirement. He passed away on August 21, 1901 at the ripe old age of 88.

Glenn’s father, George Kemp, was born in Sault Ste. Marie on August 21, 1847. He attended school at Ypsilanti. Thereafter, he was for two years a student in the high school at Ann Arbor. He was then employed for a time as brakeman on the Michigan Central Railroad between Detroit and Dexter. When he returned to Sault Ste. Marie, he became a clerk in the mercantile establishment of Thomas Ryan. Later he was similarly employed by Louis P. Trempe, with whom he remained until he was appointed Toll Receiver at Sault Ste. Marie, under Guy H. Carleton. He retained this position two years, and during the ensuing five years he was bookkeeper for the contracting firm of Barker, Williams & Bangs. He then engaged independently in the forwarding and shipping business, in connection with which enterprise he became the owner of the Union docks at Sault Ste. Marie. In 1872, he established and developed the large and important wholesale and retail coal business. He built his fueling dock adjacent to the site of the present Corps of Engineers warehouse at the intersection of Ashmun Street and Water Street. In conjunction with his dock, he used the facility to launch and moor his short lived cross-border ferry business with the S.L. Beckwith. His main interest still remained with the coal enterprise. In 1907, the business was relocated to the waterfront property that he owned between the Edison power house and the Coast Guard station. Upon his retirement in 1917, he turned over his enterprise to his three surviving sons, Harry Bell, Guy Carleton, and Jay Brenton. It was then conducted under the title of Kemp Brothers Coal Company. His other two sons, Glenn Dayton and Alexander Peter had passed away in April 1914 and in November 1918, respectively.

Mr. George Kemp was a recognized leader in business and civic affairs in his native city, where he served as president of the Sault Ste. Marie Savings bank and a director of the First National bank. Mr. Kemp was a stalwart advocate of the principles of the Republican Party, and he was called upon to serve in various public offices of local trust, including those of county clerk, county treasurer, township supervisor and village clerk of Sault Ste. Marie before the place gained its city charter. He was affiliated with the Masonic fraternity and the Knights of Pythias, and was one of the venerable and honored native sons of Sault Ste. Marie at the time of his death in 1923. He was married to Viola F. Heichhold on January 1, 1874; this event was dubbed as the social event of the year. She died in Sault Ste. Marie on August 3, 1924 at the age of seventy. The Kemp family is remembered by those who visit the Riverside Cemetery, where they will find the plot located on the far left, on the edge of the wooded area.

In his will, George Kemp bequeathed his riverfront property to the City, with life tenure to his sons. With the death of Guy Carleton on December 3, 1959, the property passed on to the city. On February 15, 1960 the City of Sault Ste. Marie was notified of a decision to liquidate Kemp Brothers Coal Company. 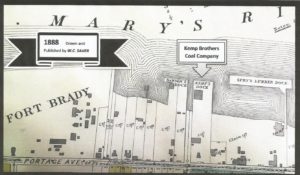 The legacy of the Kemp family was kept alive by Jean MacInnis, granddaughter of George Kemp. Her greatest accomplishment was petitioning the Governor of Michigan to name the Marina in Sault Ste. Marie, the “George Kemp Downtown Marina” in honor of her grandfather who donated the waterfront property by the Soo Locks to the city. She was born January 24, 1930, in Sault Ste. Marie to J. Brenton Kemp and Olga (Peg) Mattson and made her transition from this life on Tuesday, August 18, 2009. Her greatest joy was spending time with family and friends and traveling back home to Michigan each summer.

Glenn Street is located west of the Pullar Community Centre, between East Portage Avenue and Water Street. It has a short distance of 380 feet, information that was obtained from the City of Sault Ste. Marie Engineering Department.