“Brown Street was named after George W. Brown. In 1874 he helped build the Methodist Church which was located behind the present site of the Sault Savings Bank. Brown also owned a farm south of the city. He was also one of the first county road commissioners for Chippewa County and active in local city affairs. The first plat recorded was dated July 26, 1884. Because of his position he was also able to name two streets after his children, Leroy and Helen.

Brown, besides his interests in the Sault areas, spent considerable time in real estate investment, both here and in Corpus Christi, Texas, where he died. 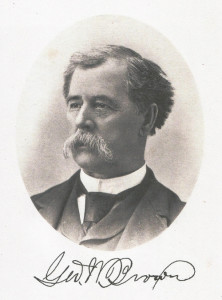 George W. Brown was born on April 5, 1825 in the town of Cornwall, Connecticut. His early years were spent in the “Nutmeg” state and when he was a very young man, his parents moved to Michigan. He finally located in Coldwater, where he was admitted to the bar. For several years, he practiced law in Branch, Calhoun and Jackson counties and established a large practice. He also lived in Jackson for several years.

On December 8, 1847 he married and had three children: Mrs. Dr. Nellie Beadle, Captain George LeRoy Brown, and Helen, known as Mrs. Fred Morse Taylor. The latter was the only one to remain with her parents during their lives.

In 1848, George W. Brown was elected a member of the state legislature and served with distinction, making his energy and ability felt in that session. He declined re-election. In 1861, he moved to Sault Ste. Marie, where he was appointed superintendent of the St. Mary’s Falls Canal, then controlled by the state. He served in that capacity until 1865. After retiring from the canal position, he returned to Calhoun County, where he resumed the practice of law and was elected prosecuting attorney.

Three years of Lower Peninsula life were enough for him. His residence in the Sault demonstrated to his shrewd mind that this city may someday be an important point, and he returned in 1868 to make his home for the rest of his life. He had no sooner reached the city and opened an office, before he was elected prosecuting attorney. When the city was organized, Mr. Brown was the Democratic candidate for mayor and was elected by a large majority. As the first mayor of the city, his work could not have been done by another person. He gave his whole time and energy to putting the city on its feet. He declined to run in 1889, but was again the Democratic standard bearer in 1891. His majority was tremendous. No one in the city ever received such an endorsement by the people. He served faithfully and well until May 1893, when he retired into private life. 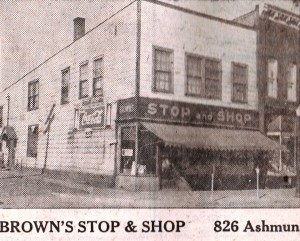 In his personal affairs, he was a bookkeeper with The Northern Electric Company and also a clerk at the Travelers Hotel. He owned the Brown Stop and Shop, which was located at 826 Ashmun Street, on the corner of West Ann Street, with the rear entrance access from Brown Street. The structures were referred to as “The Brown Block”. The neighboring streets bear his name and those of his two children, Leroy and Helen.

For some time previous to his retirement from the office of mayor, his health began to fail. Several times he battled with disease which everyone thought must be fatal, only to baffle it and become well and strong again. Up to his last sudden and fatal attack, he maintained that he was much better than before. His wife was deceased in April of 1892. Her death was a great loss to him and he never recovered his former spirits after her demise. He passed away in January 9, 1894. He was nearly 69 years old. He died of an attack of peritonitis, at his home with his daughter and son-in-law by his side. A very close friend of the deceased, the Rev. Thomas R. Easterday officiated at the funeral service, with the assistance of Rev. G.W. Luther. The Odd Fellows were in charge of the arrangements and the burial was according to the ritual of that order. He is buried at Riverside Cemetery in the vault beside his beloved wife.

As noted in the 1968 publication of “On the Street Where we Live”, the total length of Brown Street is 1,440 feet from Easterday Avenue to Sheridan Drive.

The Northern Peninsula of Michigan