“Hursley Street was named after George Hursley, son of Jay Hursley. George Hursley was a vessel master on the Great Lakes for several years.

In the spring of 1899, he went up the Yukon River to Dawson, Canada, for a very short stay, and then returned to Sault Ste. Marie. Here he took charge of a vessel and, after sailing it for a time, left the ship as she lay at a Chicago pier. He was never heard from again.

Although the street name came at a later date, it was originally surveyed in 1887.

Hursley today (i.e. 1968) serves as a street for neighborhood residential use, commencing at Court Street and running to Johnston Street, a distance of 1,951 feet.” 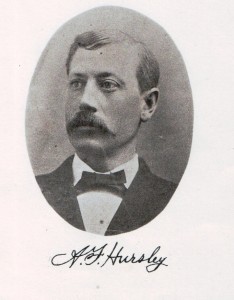 The Hursley family was one of great importance in Sault de Ste. Marie. Its representatives were devoted to those pursuits that brought them into prominence before the public, and their residence in the Upper Peninsula was sufficiently long to number them among the pioneers. An honored and worthy representative of this family is the gentleman whose name heads this article

The oldest of three children, George Hursley was born in Sault Ste. Marie and followed in the footsteps of his father, Captain Jay Hursley (1842 – 1893). Jay was born in Sackett’s Harbor, New York. George’s mother was Mary M. Daly, daughter of John Daly, a soldier in the United States Navy.

The family had been living in the Sault since 1865. They had a family of five children, with George, who had three brothers and a sister – Wayne, A. Ford, and Charles F., and his sister Minnie. George E. was a tug captain. He married Miss Louisa Hillman, and in the late 1800s lived at 314 Maple Street.

The family shared the neighborhood with residences located at 301 – 307 – 314 – 320 Maple Street. The Hursley Tug Line was located at 111 Portage Avenue West, with Captain Jay Hursley as manager and master of the tug O. W. Cheney. All of his sons were involved in the business in one way or another. Wayne was captain of the steamer Mentor while George was captain of the tug Lorenzo Dimick. The administration of the company rested on the shoulders of Charles F., who was the clerk of the Hursley Tug Line and a tug captain. With the exception of A. Ford, he was the Chippewa County sheriff, with his office located in the Chippewa County Court House. He shared residential dwellings within the Chippewa County Jail with his grandfather Kimball Hursley.

George was a member of the Masonic order, and belonged to the Bethel Lodge. His final days and resting place are unknown.

Hursley Street runs between Court Street and Easterday Avenue for a distance of 1,988 feet. This information was made available by the City of Sault Ste. Marie Engineering Department. Thank you to Mr. Joe Miller for the research and quick response.

This brings us to the end to this series of articles that have been provided by the Chippewa County Historical Society (CCHS), based on the 1968 edition of “On The Streets Where We Live” – A history of the streets and avenues of Sault Ste. Marie. It was a Tricentenary and Michigan Week project of the seventh grade students of Sault Junior High School. All are invited to visit the office of the Chippewa County Historical Society, or your local library, to read more about the origins of all the streets in our city

As we come to a close, credit should be given to Roger LeLievre, originally from the Sault and now residing in Ann Arbor. Roger is well known to many as the editor of the Know Your Ships vessel guidebook. Now retired from a newspaper career, he volunteered to proofread every article. (His mother, Audrey, is also well known locally as a retired Sault city clerk).

The CCHS’s next major venture is related to the Rendezvous in the Sault, scheduled for the last full weekend of July, Saturday July 25 and Sunday July 26. Next week, the Evening News – Sault Sunday – Features section will be bringing you a number of Native American legends written by Genot “Winter Elk” Picor. He is one of our returning reenactors and leader of La Compagnie. La Compagnie specializes in music and dance from French Canada, the Maritimes, Celtic Europe and Appalachia. The group will be entertaining us with a musical performance, provided at no charge, on the grounds of the Sault Ste. Marie City Hall on Saturday, July 25, at dusk.

This is a culturally rich experience that provides not only lively fun musical entertainment, but also the historical background for both song and dance. It’s an “edutainment” experience. Music includes vocals, flute, whistle, concertinas, upright bass, guitar and fiddle.

Make it a point to come and enjoy the songs and dance!