“Marquette was named after Father Jacques Marquette, who founded the mission of Sault Ste. Marie in 1668.

He was a French missionary and explorer in America. Father Marquette was born in Laon, France in 1637. He died in 1675 near a stream which bears his name in what is now west central Michigan.

Marquette Avenue was named in 1967; it was formerly 12th Avenue, by acclamation of our city council. Today it runs a total length of 3,920 feet from Ashmun to Seymour.” 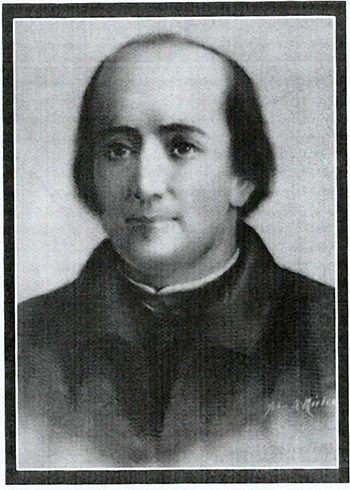 Jacques Marquette was born in Laon, France, on June 1, 1637 and joined the Society of Jesus at age 17. After he worked and taught in France for several years, the Jesuits assigned him to New France in 1666 as a missionary to the indigenous peoples of the Americas. He showed great proficiency in learning the local languages, especially Huron. In 1668, Father Marquette was moved by his superiors to missions farther up the St. Lawrence River in the western Great Lakes region.

He helped establish the mission at Sault Ste. Marie in present-day Michigan in 1668. “Here, with the help of the Jesuit lay brother Bohesme, under the direction of Allouez, and probably with the help of Father Nicholas, he constructed on the south side of the river at the foot of the rapids, a rude chapel and dwelling home. This was the first permanent Christian place of worship in what is now the State of Michigan.” (Source: The Story of Sault Ste. Marie by Stanley Newton – 1923). According to the report in Jesuits Relations of 1629 – 1670, it is deemed that the exact location of this chapel must have been near the foot of Bingham Avenue.

It was in 1671 that Father Jacques Marquette built another missions in St. Ignace and then at La Pointe, on Lake Superior near the present-day city of Ashland, Wisconsin. In La Pointe, he encountered members of the Illinois tribes, who told him about the important trading route of the Mississippi River. They invited him to teach their people, whose settlements were mostly further south. Because of wars between the Hurons at La Pointe and the neighboring Lakota people, Father Marquette left the mission and went to the Straits of Mackinac; he informed his superiors about the rumored river and requested permission to explore it.

Leave was granted, and in 1673, Marquette joined the expedition of Louis Jolliet, a French-Canadian explorer. They departed from St. Ignace on May 17, with two canoes and five voyageurs of French-Indian ancestry (Métis). They followed Lake Michigan to Green Bay and up the Fox River, nearly to its headwaters. From there, they were told to portage their canoes a distance of slightly less than two miles through marsh and oak plains to the Wisconsin River. Many years later, at that point, the town of Portage, Wisconsin was built, named for the ancient path between the two rivers. From the portage, they ventured forth, and on June 17, they entered the Mississippi near present-day Prairie du Chien, Wisconsin.

The Joliet-Marquette expedition traveled to within 435 miles of the Gulf of Mexico but turned back at the mouth of the Arkansas River. By that point they had encountered several natives carrying European trinkets, and they feared an encounter with explorers or colonists from Spain. They followed the Mississippi back to the mouth of the Illinois River, which they learned from local natives provided a shorter route back to the Great Lakes. They reached Lake Michigan near the site of modern-day Chicago, by way of the Chicago Portage. In September, Marquette stopped at the mission of St. Francis Xavier, located in present-day Green Bay, Wisconsin, while Jolliet returned to Québec to relate the news of their discoveries.

Marquette and his party returned to the Illinois Territory in late 1674, becoming the first Europeans to winter in what would become the city of Chicago. As welcomed guests of the Illinois Confederation, the explorers were feasted en route and fed ceremonial foods such as sagamite.

In the spring of 1675, Marquette traveled westward and celebrated a public mass at the Grand Village of the Illinois near Starved Rock. A bout of dysentery contracted during the Mississippi expedition sapped his health. On the return trip to St. Ignace, he died at age 37 near the modern town of Ludington, Michigan.

Marquette Avenue runs in an east to west direction, starting at Shunk Road and terminating at the intersection of Ashmun Street. The remaining portion of the street is referred to as West 12th Street, which extends to Ryan Street.